When we decide to travel, the first – and sometimes the most difficult – decision to be made is where to go. We research trying to discover which country/city fits the best according to your plans, budget and everything else. And that’s where Vancouver stands out.

Vancouver combines the best social ingredients: modernity, sustainability, culture and a lot of options for leisure, sports and fun! Parks, beaches, mountains, snow and beautiful neighbourhoods make Vancouver unique in the west coast of Canada. Consistently voted one of the world’s most beautiful and liveable cities, Vancouver combines outstanding landscapes and opportunities for outdoor activities with very sophisticated amenities of a world-class city. While this sea-level port city is known by its relatively warm temperature (around 20 degrees at summer), the snow-covered mountains located about 30 minutes from downtown area are perfect for winter sports and breath taking views of the city.

Vancouver is definitely the right place for the one’s looking for unforgettable adventures with great English and professional study programs.

Why Study in Canada?

Qualifications Valued Around the World
Canada’s high academic standards and rigorous quality controls mean that you’ll be earning a high-quality education that will open doors for your future and benefit your career over the long term. A Canadian degree, diploma or certificate is globally recognized as being equivalent to those obtained from the United States or Commonwealth countries.
Affordable Education
The quality of education and living standards in Canada are amongst the highest in the world, but the cost of living and tuition fees for international students are generally lower than in other countries such as the United States and the United Kingdom. As such, Canada is often the preferred choice for students attending college or university.
Multicultural Society
With almost all of the world’s ethnic groups represented in Canada, it’s hard not to find ethnic foods and recreational activities associated with specific cultures. In fact, your international student advisor can help you get in touch with any number of ethnic clubs and associations for you to join while you’re here.
Healthy and Safe Communities
While you may have heard of or experienced Canadians’ friendly and open nature, you may not have known that the United Nations consistently ranks Canada as one of the best places in the world to live. As an international student in Canada, you’ll enjoy all of the same freedoms which protect Canadians – respect for human rights, equality, and a stable and peaceful society.
World-Class Language Education
Did you know that Canada is a bilingual country and is considered a world leader in language training? Since teaching French and English as a first and second language is an integral part of a Canadian education, you will be able to improve your fluency and capacity for either language as you further your studies.
Exciting Campus Lifestyle
Canada’s post-secondary campuses aren’t only wired with the latest in sophisticated technology, but countless other modern amenities as well. From Olympic-quality sports facilities to public concert halls and art galleries, Canada’s post-secondary campuses offer you enormous possibilities for learning and leisure. Plus, you’ll have incredible opportunities to meet like-minded individuals and gain valuable experience through student-run governments, radio, newspapers and businesses.

Jobs for International Students in Canada

As an international student, you are able to work on campus without a work permit while completing your studies if:

As an international student, you are able to work off-campus with a work permit while completing your studies if:

Vancouver has a high-quality public transportation system. The city owns the largest number of suspended train lines in the world, in other words, the train lines are mostly overhead, not underground, what makes it able to reach all geographical edges. The population has the Skytrain, Buses and Seabus.

The following image shows all the public transportation lines available. 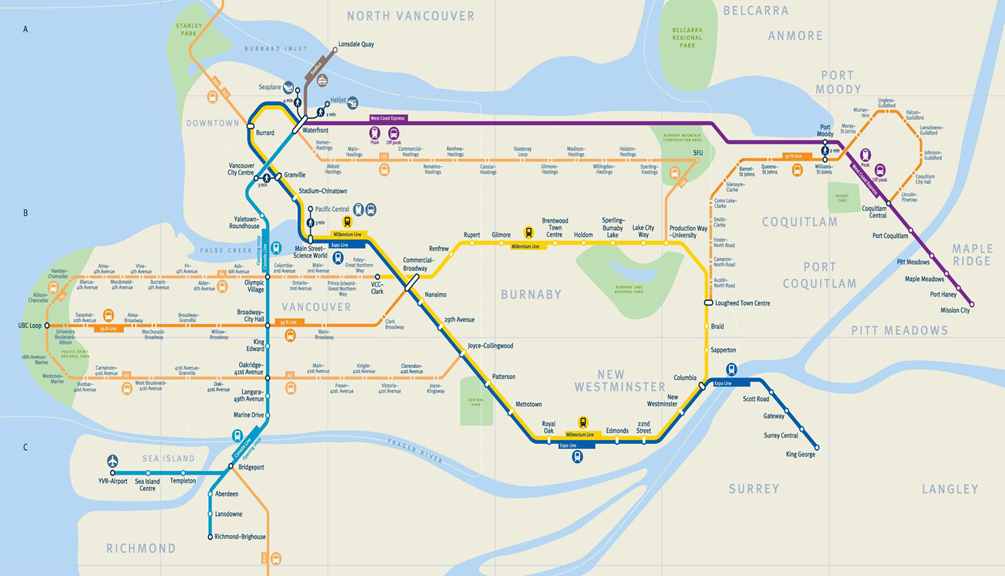 This post is also available in: Japanese, Korean, Portuguese (Brazil)